Bed bugs are small parasitic insects of the family Cimicidae (most commonly Cimex lectularius). The term usually refers to species that prefer to feed on human blood. All insects in this family live by feeding exclusively on the blood of warm-blooded animals. The name ‘bedbug’ is derived from the insect’s preferred habitat of houses and especially beds or other areas where people sleep. Bedbugs, though not strictly nocturnal, are mainly active at night and are capable of feeding unnoticed on their hosts.

A number of health effects may occur due to bed bugs including skin rashes, psychological effects and allergic symptoms. Diagnosis involves both finding bed bugs and the occurrence of compatible symptoms. Treatment is otherwise symptomatic. Bedbugs have been known by a variety of names including wall louse, mahogany flat, crimson rambler, heavy dragoon, chinche, and redcoat. Largely eradicated as pests in the developed world (primarily through the use of DDT) in the early 1940s, bedbugs have seen a resurgence since about 1995. 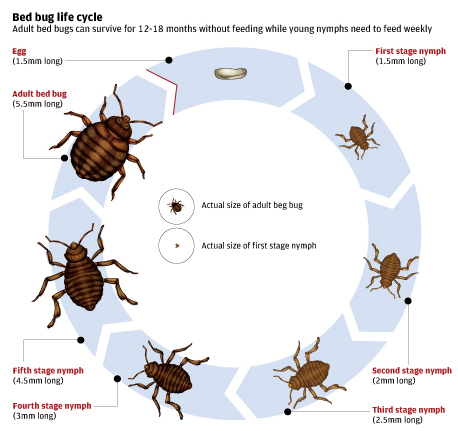 Bed bugs usually bite people at night while they are sleeping. They feed by piercing the skin with an elongated beak through which they withdraw blood. Engorgement takes about three to 10 minutes, yet the person seldom knows they are being bitten. Bed bugs normally do not reside on people like head or body lice. Immediately after feeding they crawl off and reside elsewhere to digest their meal. Symptoms after being bitten vary with the individual. Many develop an itchy red welt or localized swelling within a day or so of the bite. Others have little or no reaction, and in some people the reaction is delayed.

Where do they bite?

Unlike flea bites that occur mainly around the ankles, bed bugs feed on any skin exposed while sleeping (face, neck, shoulders, back, arms, legs, etc.). The welts and itching are often wrongly attributed to other causes, such as mosquitoes. For these reasons, infestations may go a long time unnoticed, and can become quite large before being detected. The likelihood of bed bugs increases if the affected individual has been traveling, or had acquired used beds or furnishings before symptoms started to appear. Bed bugs also are suspect if you wake up with itchy bites you did not have when you went to sleep. Conversely, it is important to recognize that not all bites or bite-like reactions are due to bed bugs. Confirmation requires finding and identifying the bugs themselves, which is what we do best. If you think you may have bed bugs, give us a call for a FREE inspection.

The types of bugs that look like bed bugs will vary somewhat
depending on your region of the country.

• About the size of an apple seed
• Long and brown, with a flat, oval-shaped body (if not fed recently)
• Balloon-like, reddish-brown, and more elongated (if fed recently)
• A “true bug” (characteristics of true bugs include a beak with three segments; antenna that have four parts; wings that are not used for flying; and short, golden-colored hairs)
• Smelly, with a “musty-sweetish” odor produced through glands on the lower side of the body. Young bed bugs (also called nymphs) are:
• Smaller, translucent or whitish-yellow in color;
• If not recently fed, can be nearly invisible to the naked eye because of coloring and size.

• Tiny, the size of a pinhead
• Pearl-white in color; and
• Marked by an eye spot if more than five days old.

A common concern with bed bugs is whether they transmit diseases. Although bed bugs can harbor pathogens in and on their bodies, transmission to humans is considered unlikely. Their medical significance is chiefly limited to the itching and inflammation from their bites. Antihistamines and corticosteroids may be prescribed to reduce allergic reactions, and antiseptic or antibiotic ointments to prevent infection. Though not known to carry diseases, bed bugs can severely reduce quality of life by causing discomfort, sleeplessness, anxiety, and embarrassment.

Is it hard to find bed bugs?

In some cases bed bugs can be visually detected in the folds and creases of mattresses, in bed frames, box springs, night stands, behind baseboards and around the beds. But sometimes they can be very hard to detect, especially in the early life stages as they can be smaller than the tip of a pen. They will also hide in couches and furniture in other areas of the house where they can get a blood meal. Bed bugs create a lot of waste. Dark blood spots and skin that has been shed generally make it easier to find than the insects themselves.

If you suspect you’ve got bed bugs, give us a call for a FREE inspection. 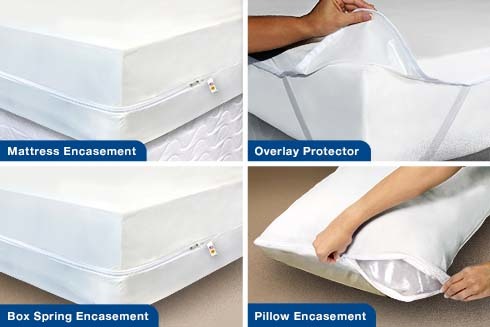 A bed bug mattress cover is an important weapon in protecting your mattress, box spring, and bedding during a bed bug treatment program.

Help to eliminate bed bug hiding spots Address early detection of bed bug infestation Protect and recover your expensive bedding investment Stop bed bugs from escaping A bed bug certified encasement creates a barrier between the mattress and person sleeping on it. Mattress Safe® laminated “Superior” or “Ultimate” encasement will not allow bed bugs to enter, escape or bite through the encasement. Used as a prevention tool or during a treatment program, a certified bed bug mattress cover is safe, eco-friendly, and provides non-chemical protection.

Bed Bug Certified Mattress & Box Spring Protectors Eliminate the Primary Hiding Spots of Bed Bugs Mattress Encasements must remain on the mattress for 18 months or longer during bed bug treatments. This lengthy quarantine period is due to the fact that bed bugs can live for 1 1/2 years without feeding. Mattress Safe® offers the unique “Duo” Protection System consisting of the “Superior” or “Ultimate” Total Mattress Encasement plus the “Simplistic” Overlay Topper with corner anchor bands, thus enabling the removal of the topper for laundering or when maintenance is required. The “Duo” Protection System provides an extra layer of comfort and with the “Ultimate” mattress encasement, it also allows the option of flipping the mattress anytime during the quarantine period.

Give us a call to order a Mattress Safe bed bug cover today!